I wish you all the best for 2017 and I hope this year will bring a lot of love, fun, adventure and improvement. This changing of the years I missed Holland a bit. There was no party and in my family we did not even stay awake till 00:00. So at 22:00 I was already in bed. There was only very little firework, less than in Holland the days before the changing of the years. It was a strange experience lying in bed so early.

Newyearsday turned out to be a festive day. First I was invited to come to church by the Christian brother. This time, there was another pastor in church. He had a different way of preaching, and it was more about money, that we all can be rich, and that we should give to the church. The pastor also talked a lot about sacrifices you should make for this new year, especially in the way of giving money to the church. He even sold some books for 200 or 250 cedi, which is about 50 or 60 euro. He waited in front of the church until people came and bought the book, which about 10 to 20 people did. This pastor was the ‘ head paster’, so I was honored to experience faith healings this pastor did, by putting his hand on people’s head while he prayed for them.  The blessing was an intense experience, in particular for the persons being blessed. So there were men who had the task of holding the person that was blessed, to prevent him or her from falling. There were also people with blankets, which they put on the blessed people who were lying on the ground. All in all it was quite an impressive experience and special to see that people were so touched by the pastors blessings. Later I found out these blessings were for the people who contributed a high amount of money to the church. I found it inappropriate to make pictures, so unfortunately I cannot show you how this looked.

A strange thing about this mass was that there were people of a local bank. They were wearing shirts of their company and did a prayer, after that one of the persons was blessed by the pastor. I was told that these bank persons were here, because it was like a competition and they would like the people in the church to put the money on their bank. Maybe the bank payed money to be there? I have no idea.

On newyearsday we ate cake. I was planning to buy that for a birthday of one of the children. In my family we do not celebrate birthdays, because there is not enough money to celebrate the birthdays of all the three kids. So there are no presents, no cake and no visitors.  One of the girls was supposed to have her birthday December 29th. But my mother found out it was not her birthday! Because they never celebrate, they do not remember the dates. Because they were all looking forward to the cake I was planning to buy for the birthday, and since newyear is also a reason to celebrate, I bought it for new year. They were all very happy and grateful! Only because a cake and some drinks, which costs about 5 euro in total.  Maybe you can tell this story to your kids when they are whining and complaining, to let them know how lucky they are. 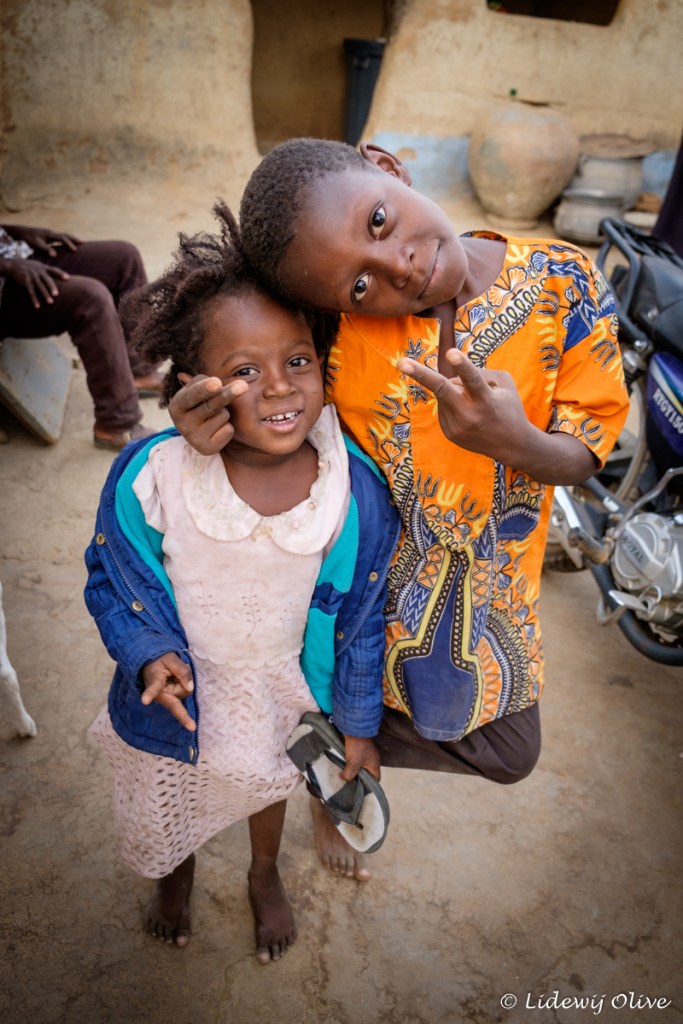 During Christmas and newyearsday, every now and then someone came to bring food. Like one cooking pot with some food, which is shared with the whole family. So all the time I am very full! Especially because the food is mostly carbohydrates.

Cutting the yam. In here we do not use a cutting board Yam and a sauce 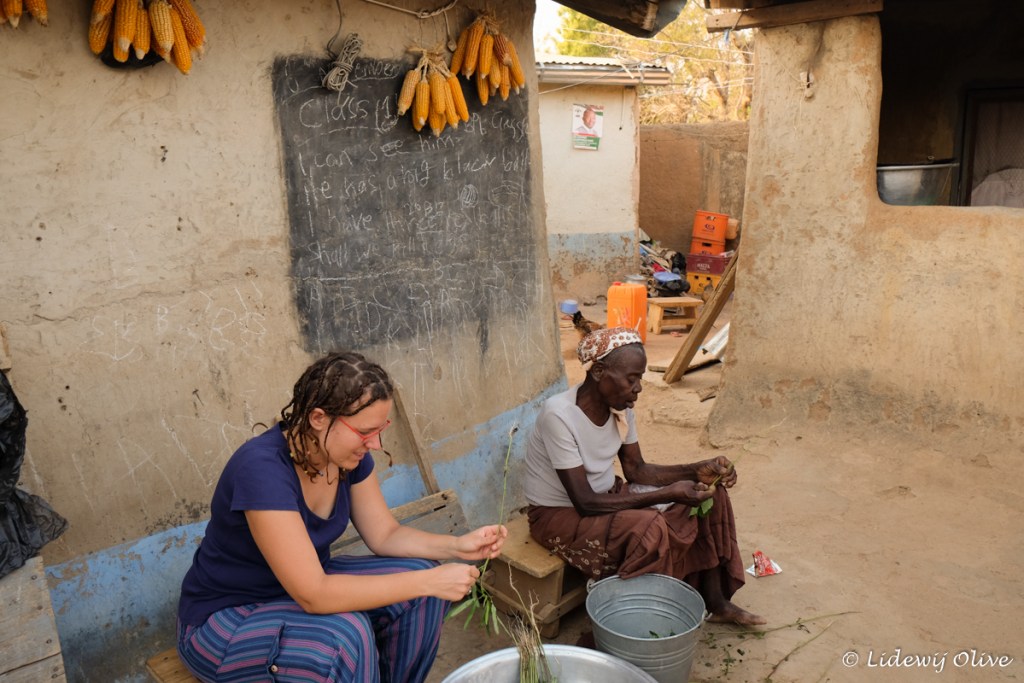 I also found out something about the social security system here. Where in Holland you go to an institution or a company when you have a problem, here they built a network. For example in the church. Some people go visit families to help them with problems. You built a whole network of people around you. When you have a problem, you can go to the person you find most suitable for this particular problem. For example, when your car is too small, you can go to a person who has a bigger car to lent (you do not do that at a renting company) or when you have psychological problems, you go to someone to talk to (not to an institution). It is very important to have your network of people caring for you. You can even buy stickers from the church, which you can put on your car. When you see a car with this sticker, you know the person is part of your network, and you would be more inclined to help this person. 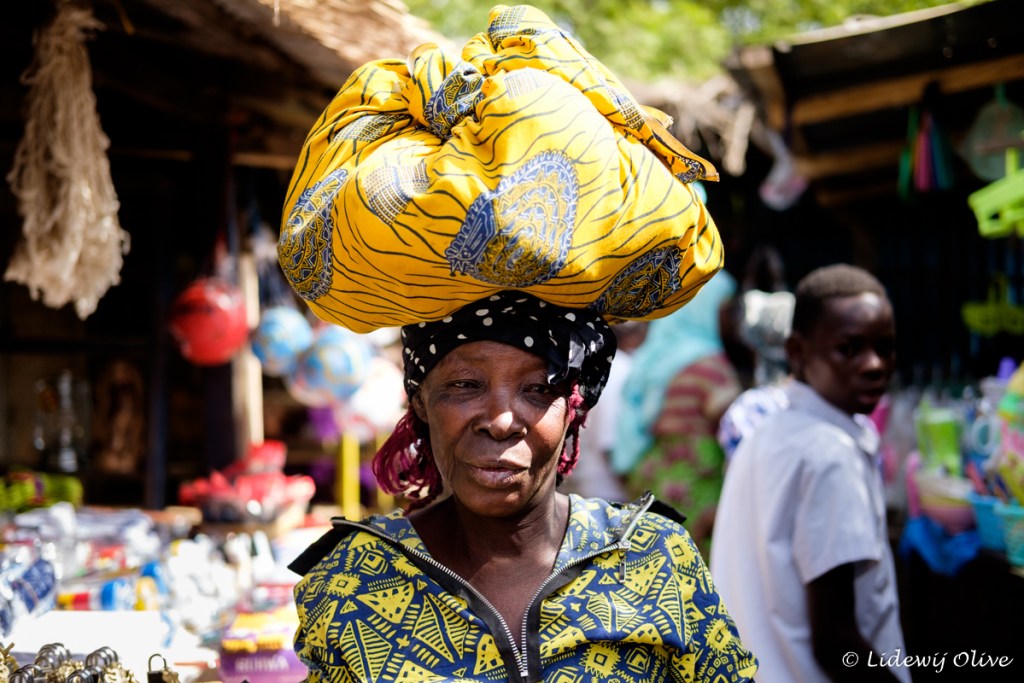 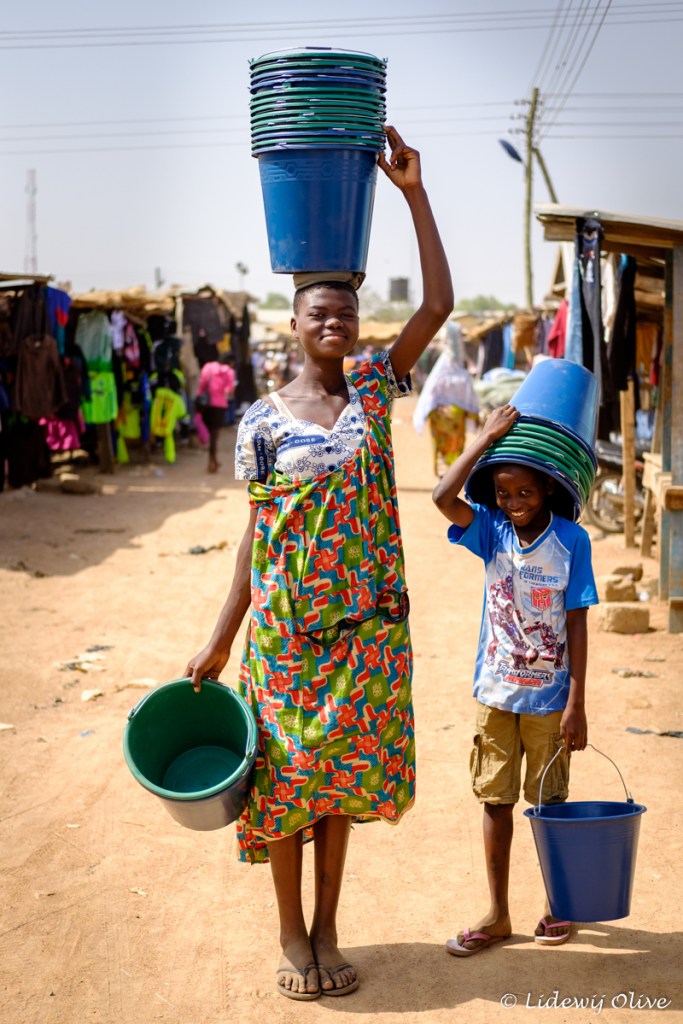 On the television there is a commercial balk about getting a visum to USA or Europa. They really propagate it!

When we watch TV we sit on the ground, because there is no couch

We have a lot of baby animals in the house! 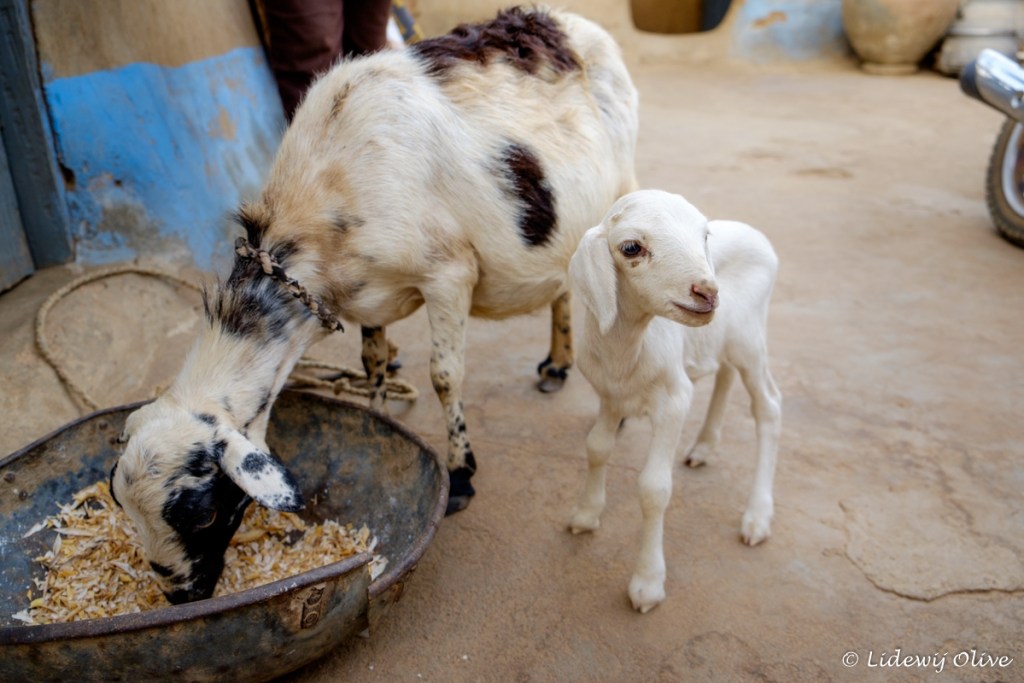 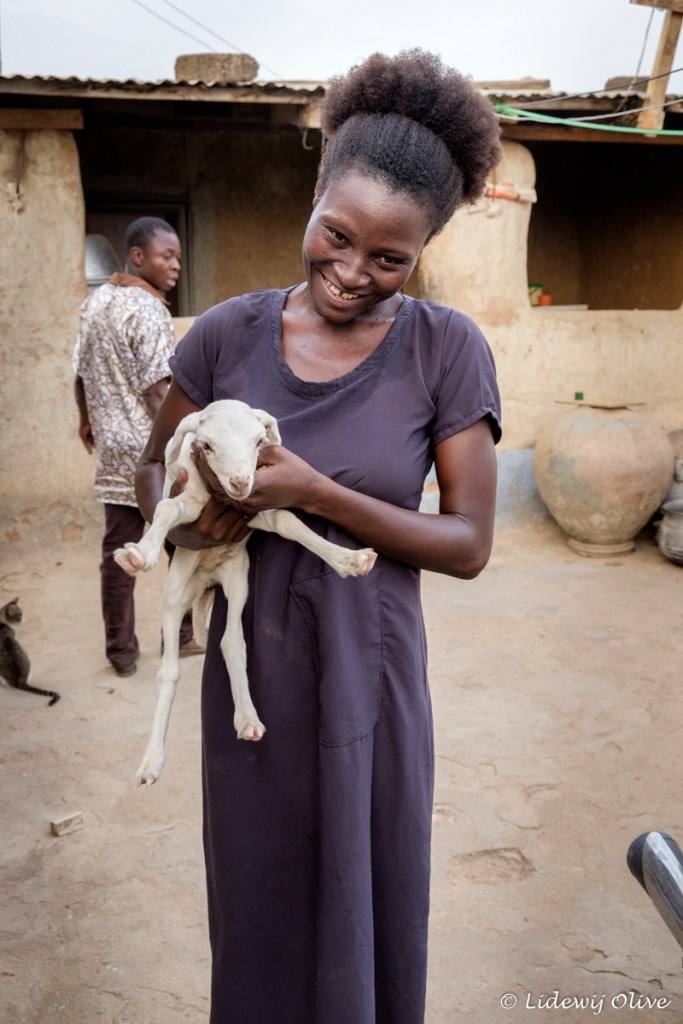 Water is sold in sachets Ghanian have some typical English words. They say ‘ small small’ , when something will go little by little, or when there is only a limited amount of something. When there is a lot of something, they say there is plenty. It is always small small or plenty, not something in between. When I arrive home from work, they tell me II arrived early or late, never something else. What people also use a lot is ‘ you did well’, for example when you finished your plate, when you finished a working day or when you were able to find a certain place. When they ask or you want more food, they ask ‘ should I add more’. When you go and get something they see ‘ come and collect’, for example with food: ‘ come and collect your plate’. The children songs I have on my laptop are called ‘ toys’  by the children. Some people do not ask for something, they say they need it and then they presume you will do or give it to them.  Other words that are used a lot are: ‘ Hey!’ (in a high tone) and ‘ Aaahaaa’

Some people buy things and then they do not pay for it. For example, they order a customised hand made piece of clothing with my father, and when they come and collect, they say they do not have the money. Then the labour is already done. This is the reason why my mother stopped her business. She sold food from the house, but there were too many people who collected the food and did not pay. They said they will come back or send someone to pay and they don’t.

We dry shoes on the rooftop. Everybody is doing laundry with the hand, nobody is having a machine. The kids in my family almost have no toys to play with and they hardly get any treats or candy or cookies. The chocolate paste I brought from Holland is the treat. They play with empty sackets of water and empty medicine packages.

Special food is shared with a lot of people. You have to take that into account when buying or cooking something special! Now I have a bike to go to my temporary office! Very secure taxi service, and of course the advertisement is in multiple fonts 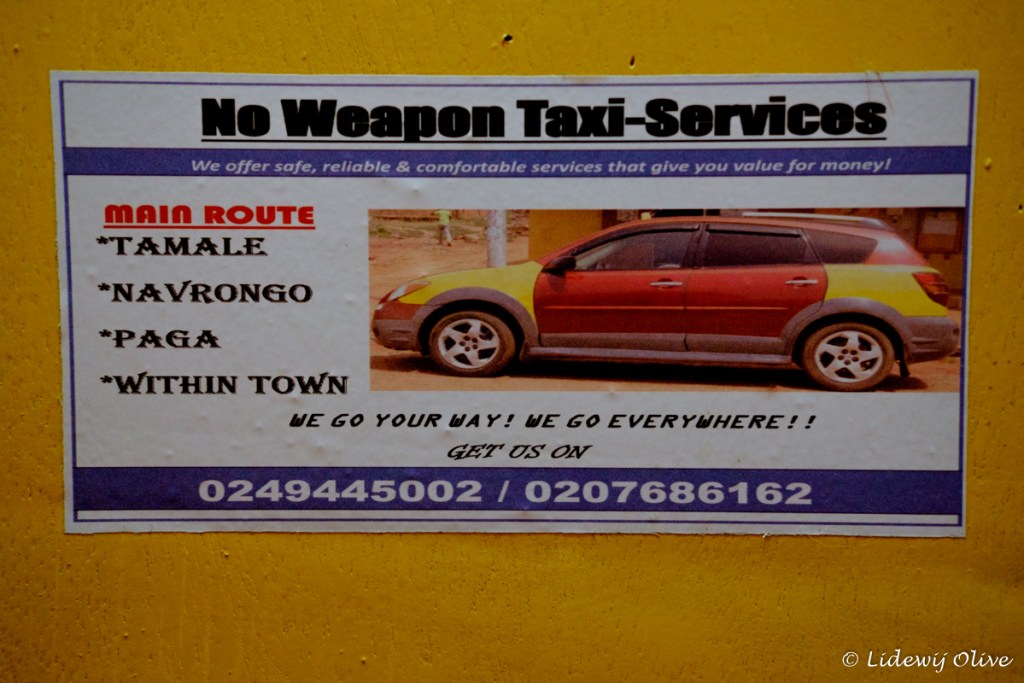