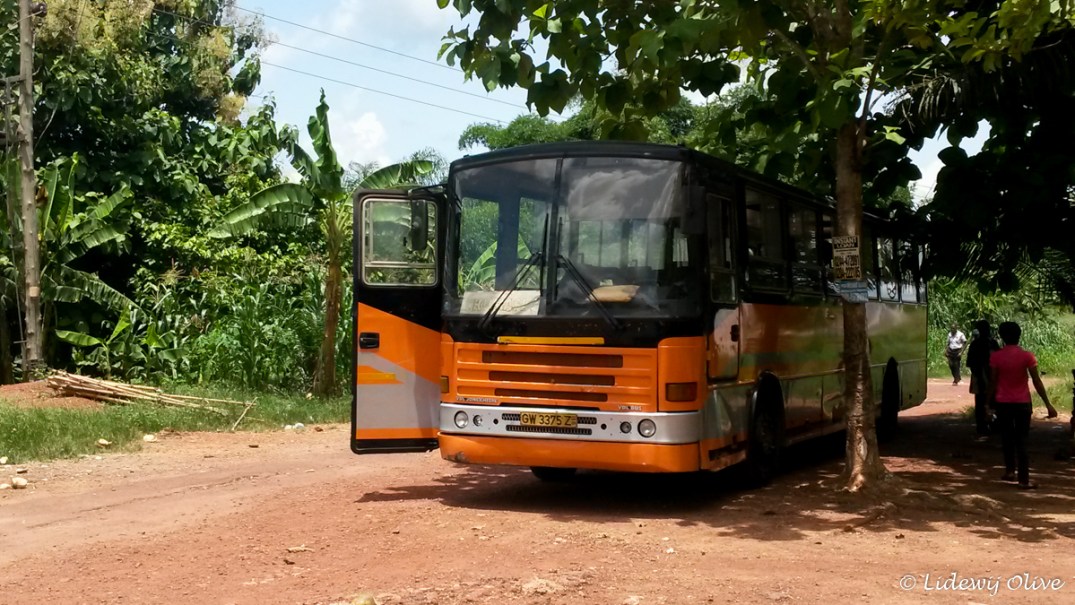 One time we had a little bit too much of being cramped into a small minivan with too many people. So we thought we would try the ‘Metro Mass Bus’. It is a full size bus, notoriously known for breaking down along the way, which involves waiting for a long time until there will be a new bus. But it also involves having a lot more leg space and being the bigger vehicle in case of an accident.

The Metro Mass bus works according to the same principle as the trotro: you wait until it is full and then it leaves. But there are some differences.

You do not wait in the car, but you wait outside. There are benches and you sit according to your place. While there is still nothing going on, you can put your bag on your bench to secure your place. Meanwhile you can leave and do other things.

For us this took about half an hour. Then we were being called, because the bus was going to leave. Half an hour later the bus was really leaving. What happened in that time?

First you have to know that my experience with Ghanian people is that they are really good in waiting. But as soon as there is any action going on, they seem to be in a hurry. So as soon as someone is saying the bus is leaving, everybody is going to sit on their seat and gets the money to buy the ticket, so they are fully ready to leave.

Ten minutes after we were told the bus was going to leave, the personnel was ready and the bus went to the benches where everybody was waiting. Before that the bus was parked some 10 meters further.

Then there is impatience. Somebody is just getting out of a taxi and bags are lying in the way where the bus wants to park. The bus that just stood still for more than half an hour. But the bags have to be removed immediately. The bus driver is not thinking about waiting, so everybody runs and removes the backs.

Then we have to buy tickets. Logically we do that now, and not like 40 minutes before when we arrived at the bus station. There is a commotion. The lady selling the tickets is starting on the left side, while the right side were the first waiting people. All people disagree, but the lady is still starting on the left side, probably thinking that everybody will be in the bus.

When we bought our tickets, which is about 4 euro for a 4 hour bus trip, we go to the bus and buy a ticket for our luggage. Then we can sit in the bus on the seat assigned to us. This all took about 15 minutes. People are sitting, going out the bus, sitting again and then finally some action is going on.

The bus driver is giving a 5 minute speach, welcoming everybody in the bus, saying his prayers, and a ‘as salamu alaykum’ for the muslim people.

And off we go.